In many ways, I feel like we're in a new chapter of our story, one that is so normal that it's hard to know what to write about. I never wanted to be a "mommy blogger" -- what's incredible or beautiful or hilarious to me is likely those things to me only because Lexie is my daughter. I don't think they'd necessarily be interesting to anyone else. As Lexie gets older, I'm also starting to feel like it's inappropriate for me to post pictures of her on an open forum. When she was my little baby, that was fine, but now she's getting to be her own person. However, after receiving a few messages asking me to check in, I thought an update might be in order.

My last post spent a lot of time discussing Lexie's feeding delays. The feeding therapies we've engaged in over the last year have made a huge difference. We did not end up doing any of the intensive weeks-long programs -- instead, we combined occupational therapy (for sensory issues) with feeding-specific therapy, first individual and then in a group with other kids. Lexie is on track to graduate from her last therapy - feeding group - at the end of March. She's still not a huge fan of fruits and veggies, and continues to have weak jaw strength so she can't deal with anything very chewy (like a lot of non-ground meat). But at this point she eats more foods than a lot of three-year-old kids, and we can often get her to try new things - at least a lick. We can take her to restaurants and be at least somewhat sure that she'll behave and eat some of her kids' meal. Her favorite food is macaroni and cheese. I'm still amazed that she has a favorite food - a year ago she wouldn't eat any food at all. No hyperbole - she literally could not bite, chew, and swallow solid food.

It's hard to explain the euphoria we feel when Lexie sits down at the table and eats meat lasagna, eats a bowl of Cheerios in milk, or agrees to take a bite of a green bean (we've learned it's ok if she then spits it out onto her plate - the bite itself is a step in the right direction). We were under seige for a long time with her eating challenges, and through the course of this past year, the weight has slowly lifted. It was a long, slow process, but we're almost there. It is a huge relief.

In most other ways, Lexie is a normal little 3-year-old girl. She loves books, drawing, painting, singing, dancing, and watching classic movies with her dad. I realize it's probably inappropriate for her to watch, say, Gone With the Wind, but it's good bonding time for them and they both love it. Any movie with a great soundtrack has her rapt attention. She doesn't really understand what's going on. When they watched Lawrence of Arabia, she kept asking about all the ghosties (her interpretation of the men in their white dishdashas). I make Steve fast forward when there are fight scenes and such.

There is one last area in which Lexie is lagging her peers - potty training. Preemies are known for being behind the curve here, but I'm starting to worry a bit about it. She's the only one in her class who has never peed on the potty at school (or at home for that matter). If she doesn't get trained by May, she'll be held back in her class at school. I wouldn't worry about this, but Lexie LOVES her teacher, and she's a smart, observant little girl, and I do NOT want her putting it all together that as long as she refuses to pee on the potty, she gets to stay with Miss Roxana. If that happens, Lexie will be in diapers until she's 5. She does show all the regular signs of being ready to go on the potty - she just refuses to actually sit there. We need to get over the hump. So I'm planning a little 3-day stay-home potty training boot camp in April for her and me. Wish us luck!

As for me, I feel like my little family finally has hit its groove. The daily panic and near-despair from the eating problems have faded away, and my work absences are down to a minimum as the various therapies wrap up. I'm starting to think about unsubscribing to the preemie mailing lists and message boards, because the discussions there now seems so foreign to me. I think my family is ready for a new adventure. No, not another baby - I have not forgotten 9 weeks of hospital bedrest and 6 weeks of the NICU. But a move south - way south - may be in our future.

If it is, I think we'll have a new story to tell.

For now, I leave you with this - Lexie at Christmastime on the steps of an old farmhouse... eating Nutter Butters. 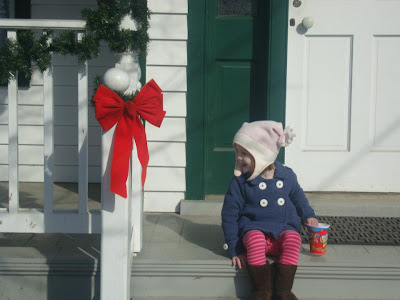 Posted by Two Shorten the Road at 1:59 AM

Can't tell you how happy I am to hear about Lexie and your family! You are often in my thoughts because I know how you've struggled with her developmental issues. Kids truly are amazingly flexible and trainable. With the right therapists, nothing can stop them.

You won't ever forget the hard beginnings of Lexie's life and the trauma you and her dad went through. In time, the sting of it will soften as you watch Lexie become a real person. I still marvel at my nephew Alex's progress. It seemed to hopeless in the beginning. He has proved alot of people wrong!

Whatever you decide to do in the future, please know that your little family has inspired and encouraged more others than you'll ever know. May God continue to bless you all.

Good to see you again and thanks for the update! I don't know if you remember me, but I was Elizabeth at I Thought Unicorns Were a Myth.

Two Shorten the Road
This blog chronicles my family's journey through life, including infertility/loss, preterm labor, and the birth and progress of our daughter Lexie, born 10 weeks premature. The blog title, "Two Shorten the Road," is an old Irish proverb that basically means a trip is shorter when you have someone to tell stories to. For me, it's very true. Our adventures -- or misadventures -- along the way become woven into the fabric of who we are. I hope you enjoy reading. -- Megan 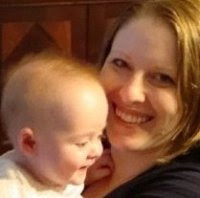 "Best Of" My Random Stories

Bloggin' With My Homies

I wouldn't have thought this necessary, but a Washington Post article has made me reconsider. Don't steal my stuff, ok? And so:

All content including original writing and photos is copyrighted unless stated otherwise. The copyright forbids you to reproduce or distribute any material anywhere on the Internet or offline (magazine articles, CD, TV, etc.) without written permission from me. You may link to articles to your heart's content.